The effect of prior endurance training on nap sleep patterns

The effect of prior endurance training on nap sleep patterns

One of the most important, yet often underrated, aspects of an athlete’s training routine is recovery. Adequate recovery can help reduce fatigue, injury, and prevent overtraining while keeping an athlete as fresh as possible and able to perform at their best each time they train or compete. Amongst recovery strategies of nutrition, hydration, physical therapy and massage, one unexplored strategy is a daytime recovery nap. Such a strategy may be particularly useful for athletes in endurance-based sports as a way of optimising recovery between sessions, since these athletes regularly perform multiple training sessions each day.

The purpose of this study was to assess how well athletes sleep following a morning endurance training session by examining the sleep content of a daytime nap. Furthermore, this study examined the effect of the circadian timing of the nap as well as the effect of the interval between the training bout and the nap on the sleep quality of the recovery nap. Findings of this research will inform the sleep quality of a 90 minute recovery nap following endurance training in athletes, and will provide coaches and athletes with an optimal strategy to incorporate a recovery nap into their regular training routine.

Six physically fit male volunteers (age 22.53 ± 2.38 years, BMI 24.15 ± 1.44 kg.m-2) were recruited as subjects. Signed, informed consent was obtained from all subjects prior to participation in the study. Ethics approval for this study was granted by the institution Ethics Committee.

Subjects were required to perform a standardised 90 minute endurance training session in the morning followed by a 90 minute recovery nap at either 1 or 2 hours post-training. The design permitted the comparison of the nap condition that commenced at 10:30h (conditions 1&2) with that commencing at 11:30h (conditions 3&4). Furthermore, this design permitted assessment of the effect of the time interval between endurance training and the nap by comparing the 1 hour interval (conditions 1&3) with the 2 hour interval (conditions 2&4). Finally, this design allowed for an assessment as to whether there were any interaction effects between the circadian timing of the nap and the time interval between training and the nap. Each recovery nap session lasted for 90 minutes, which approximates the length of a normal adult human sleep cycle. 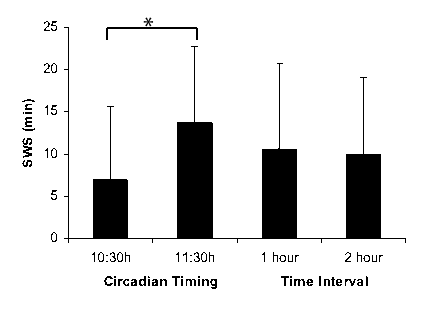 Figure 1 – Effect of circadian timing of the nap and time interval between training and the nap on slow wave sleep (SWS) (min).

One subject in particular showed a gradual improvement in TST over time from 5.5 minutes during his first experimental trial, to 73.5 minutes during his final experimental trial (Figure 2). Furthermore, this subject’s sleep onset latency showed a gradual decline over time, starting at 42 minutes in his first trial, and ending up at only 9 minutes in his final trial. 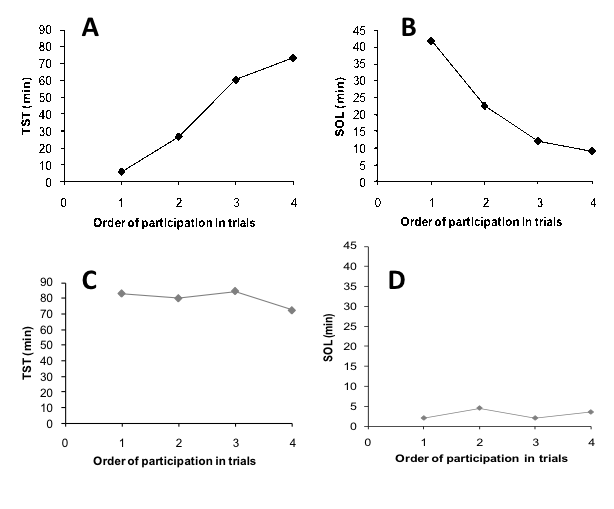 Figure 2 – Total sleep time (TST) (min) and sleep onset latency (SOL) (min) values for subject 1 (A and B) – a habitual non-napper; and subject 2 (C and D) – a habitual napper, during their participation in experimental trials over time between 1 (first session) and 4 (last session).