Hockey Australia has today announced the 2022 Kookaburras squad, with 8 Team NSWIS athletes re-named in the team.

The Kookaburras, arguably one of the most consistently successful Australian sports team over the past two decades, have been ranked among the top four nations in the world in hockey over the past 30 years.

The Australian men have won a medal at every Olympic hockey tournament since the 1992 Games in Barcelona and have amassed ten Olympic medals in total since first competing in the 1956 Melbourne Olympic Games. Most recently, earning a silver medal of the Tokyo 2020 Olympics.

Australia’s men have won every one of the six Commonwealth Games hockey tournaments to date and are one of only three nations ever to win two men’s World Cup crowns back-to-back.

The squad announced today, features 8 NSWIS athletes reselected into 2022 however the squad will look to extend to 23 in the new year, with four more players due to be added following some selection camps in early 2022.

Our congratulations go to:

For more details on the 2022 squad, visit https://www.hockey.org.au/home/ 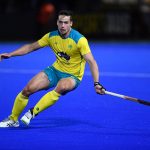 Tom Craig, a tall and powerful forward is a product of the Ryde Hunters Hill Hockey Club’s junior mentoring program, which aims to develop junior players into professional elite athletes. Finding his passion for hockey after travelling the globe with his family, Tom made his debut in 2014. In the Kookaburras kit, he holds 102 caps. Outside of the kit he studies Law and International Studies at Macquarie University.

Tim Brand was elevated to the National Senior Men’s Squad in 2018. A forward of the Development Squad in 2017, Tim was shortly added to the senior group having developed well during a strong year which included scoring two goals as New South Wales won the Under-21 National Championships. The striker, who cites Ryde-Hunters Hill’s 2015 premiership win and the Tokyo Olympic silver medal as two of his career highlights, has 53 caps to his name and has recently completed his Bachelor of Commerce and Actuarial Studies at the University of New South Wales, is also a finalist of tonight’s NSWIS Awards, in contention among a strong list of finalists for the 2021 Southern Design Junior Athlete of the Year Award. 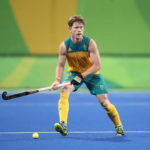 Matthew Dawson, son of former Australian cricketer Trish Dawson, first took up Hockey at age eight. Making his debut in 2014, the defender was part of Australia’s 2016 Rio Olympics team and excelled at the 2017 World League Final where the Kookaburra’s claimed the win. Matthew earned runner-up of the Kookaburras of the Year that year for his impressive performances.

During the 2018 Commonwealth Games, Matthew earned his 100th cap (now 154), scored in the final and claimed the gold medal alongside his team. 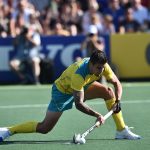 Brother of former Kookaburra Kieran, Blake Govers cemented his place in Australia’s final team for Rio 2016 after an impressive score on debut in 2015.

His first international season included ‘Best Young Player’ and ‘Top Scorer” awards at the World League Semi Final, an Olympic qualifier in July 2015. Injury ruled him out of the World League Final later that same year.

After some time out of the team following the Rio Games, Blake returned with five goals against Papua New Guinea at the 2017 Oceania Cup. He continued his season to finish as Australia’s top scorer, boosting his outstanding goals-to-games ratio. A qualified bricklayer off the field, Blake re-joins the 2022 squad with 111 caps to his name. 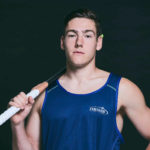 Kurt Lovett was named in the Kookaburras team for the first time in November 2019. Making his debut in 2020 against Great Britain, Kurt stepped up from the National Development Squad with an exceptional season in the Hockey One League with NSW Pride.

Lovett was a member of the 2019 National Development Squad and performed outstandingly during the recent Sultana Bran Hockey One League, scoring eight goals for the season as part of NSW Pride’s all conquering men’s championship team. 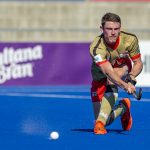 The 22-year-old, Dylan Martin, from the regional New South Wales city of Wagga Wagga was the only addition to the Kookaburras squad for 2021. Invited to the Kookaburras national selection camp in Perth, Dylan made every post a winner as he impressed in the four intra-squad matches.

Receiving the call up, Dylan quickly relocated to Perth to join the squad and now holds 13 caps. 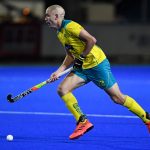 Discovering hockey at the age of five through his family’s passion for the sport, Flynn Ogilvie made his senior international debut in November 2014 against India in Perth. Hockey runs in the family for Flynn, who with his five siblings all turned out for the University of Wollongong Hockey Club. Keen indoor players also, Flynn played alongside his brothers Kurt and Heath at the 2015 FIH Indoor World Cup in Germany. Now with 123 caps, Flynn looks to continue to his feats with the 2022 squad. 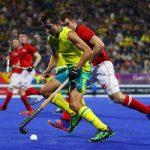 Former coal miner, Lachlan Sharp was another to earn his debut in late 2017, bursting onto the field for his first taste of international hockey at the World League Final. The attacker, who hails from Zig Zag and Ryde Hunters Hill Hockey Clubs, impressed on debut tournament.

Scoring the decisive goal of the 2018 Azlan Shah Cup final, claiming the gold medal at the Commonwealth Games, and scoring two goals at the 2018 Champions Trophy title among his impressive accolades.

Despite his international achievements, Lachlan still cites Ryde’s maiden premiership in 50 years in 2015 as one of his career highlights to date.