NSW Institute of Sport (NSWIS) scholarship holder, Jakara Anthony, caught up with ABC’s Kia Handley to discuss all things ahead of the Winter Olympics.

Jakara continued a breakout season between 2018-2019 earning her first ever world cup podium and finishing the season with a total of six medals and a 2nd place world ranking. In the 2019-2020 season she went on the claim an additional four world cup medals and held onto her 2nd place ranking for the second year-in-a-row.

While COVID forced several events to be cancelled throughout the 2020-2021 season, Jakara narrowly missed the podium twice after reaching the top-six super final.

Heading into the 2022 Winter Olympic Games in Beijing, Jakara will no doubt be one of Australia’s top medal prospects.

Earlier this week, Jakara caught up with ABC’s Kia Handley and discussed all things preparation and training as we close in on the Beijing Winter Olympic Games, which are due to start in February 2022.

Due to depart in early November for a training camp in Sweden and travelling internationally thereafter, Kia spoke with Jakara on where she’s going and what’s still to come.

“This year, we’re departing at the start of November for training camp in Sweden and then head to Finland… we have the world cup tour, which is our Olympic qualifying event. So that starts in Finland and then we go to Sweden, France, Canada, America, Italy and then head to Beijing – it will all come around pretty quickly.”

Kia reminded us that despite the gruelling competition schedule in the lead up to the games, the Australian Winter Olympic Team is still yet to be announced.

“The team will be officially selected after the final qualifying event, which I think is the world cup in America around mid-to-late January… so it will be pretty close” Jakara explained.

Despite the close proximity, Jakara says her focus isn’t on the Games or any of the events right now.

“I’m just focusing on what I can do at this point in time to give me the best chance possible when I get there. So right now, that’s strength and conditioning because I can’t actually ski. So that’s my focus right now”. 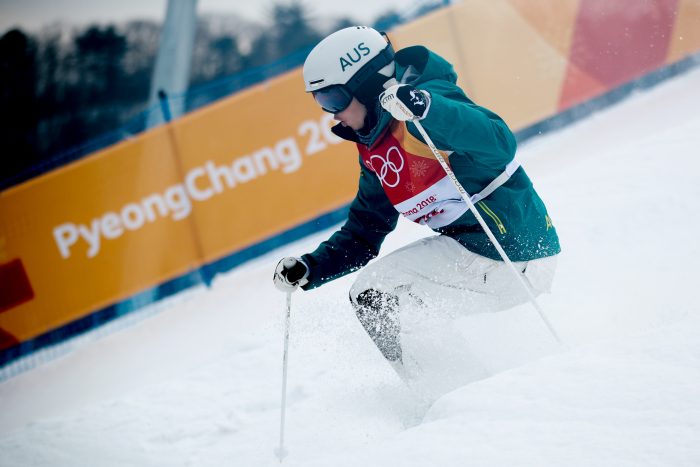 Pending qualification, this will be Jakara’s second Games following on from her debut in Korea 2018. When asked by Kia if it feels different heading in to her second Games, Jakara had this to say,

“it is very different going into these games”. “Going into the last games, in my head, I was going to get the experience and so that come this time I knew what I was heading into. And so, I think these games, I have a bit more performance focus than in the last games”.

The goal, of course being a podium finish, but Jakara says there’s no point focusing on that right now, because she can’t control it.

“I’ll just be focusing on what I can do to give myself the best opportunity possible, to perform how I know I can”.

Alongside Jakara, many of our Winter Olympian hopefuls have spent the Australian winter in the Snowy Mountains and are now preparing to head north ahead of the intense competition schedule.

With a qualification period due to end on the 16th of January 2022, we wish all athletes well in an incredibly busy lead up to the Beijing Winter Olympics, in their world cup preparations and we look forward to the Australian Olympic Team announcement/s to come.

HC Distributors have a current vacancy, suitable for athletes interested in joining their warehouse team....

Keen for a role with the LA28 Games?

Olympians and Paralympians are invited to apply for the LA28 Fellowship Program....

Shooting for the Stars

A celebration of sports, empowerment, resilience and recovery from lockdown....

HC Distributors have a current vacancy, suitable for athletes interested in joining their warehouse team.
Find out more

Keen for a role with the LA28 Games?

Olympians and Paralympians are invited to apply for the LA28 Fellowship Program.
Find out more