During the Tokyo 2020 Paralympic Games, 44 NSWIS-supported athletes wore the green and gold as they competed against the best in the world.

We’ve selected some of our highlights from each day of the Games.

Ryley Batt, in his fifth Paralympic Games, alongside fellow Paralympian Danni Di Toro competing in her seventh Games, was given the honour of carrying the Australian flag at the Tokyo 2020 Opening Ceremony.

Australia’s wheelchair rugby team, the Aussie Steelers, captained by Ryley Batt and accompanied by fell NSWIS athletes Andrew Edmondson and Richard Voris began their Paralympic campaign. Targeting a Paralympic gold three-peat, they suffered a shock defeat in their opening pool game, going down 53 to 54 points to Denmark. It was the first time since the final in Beijing 2008 that the Steelers had been defeated at the Paralympics.

The Rollers began their campaign in strong fashion beating Iran 81 points to 39.  Unfortunately, the pool qualification began in defeat for the Gliders going down Germany 58 points to 77.

On this day, Victoria Davies and Sharon Jarvis competed in equestrian – grade II and III respectively, they both achieved top ten placings.

A world record breaking ride from 24-year-old Amanda Reid saw her win gold in the women’s C1-C3 500m time trial. Reid was up against tough competition, with a Paralympic record and World Record broken before she took her place on the start line. The three-time Paralympian got off to a flying start and her finishing time of 38.487 secured her gold as she became only the fifth indigenous Australian since Ben Austin in Beijing 2008 to win gold for Australia.

On this day, a brilliant final freestyle leg saw 20-year-old Tiffany Thomas Kane repeat her medal performance from Rio with a bronze in the women’s 200m individual medley – SM7 final.

Madison de Rozario broke the Paralympic record to claim her first gold medal at a Paralympic Games in the women’s 800m T53 final. It was Australia’s first track gold of the Tokyo 2020 Paralympic Games.

Competing in her fourth Paralympics, 27-year-old de Rozario entered the Tokyo Games a three-time Paralympic silver medallist, three-time world champion and two-time Commonwealth Games gold medallist amongst many other accolades, but it was that elusive Paralympic gold medal she was missing.

On this day, Erik Horrie rowed himself into Paralympic history as he won silver for the third successive Paralympic Games in the men’s single scull – PR1 and para-triathlete Lauren Parker claimed silver on her Paralympic debut in the women’s PTWC race, missing gold by one second after more than an hour of gruelling racing. 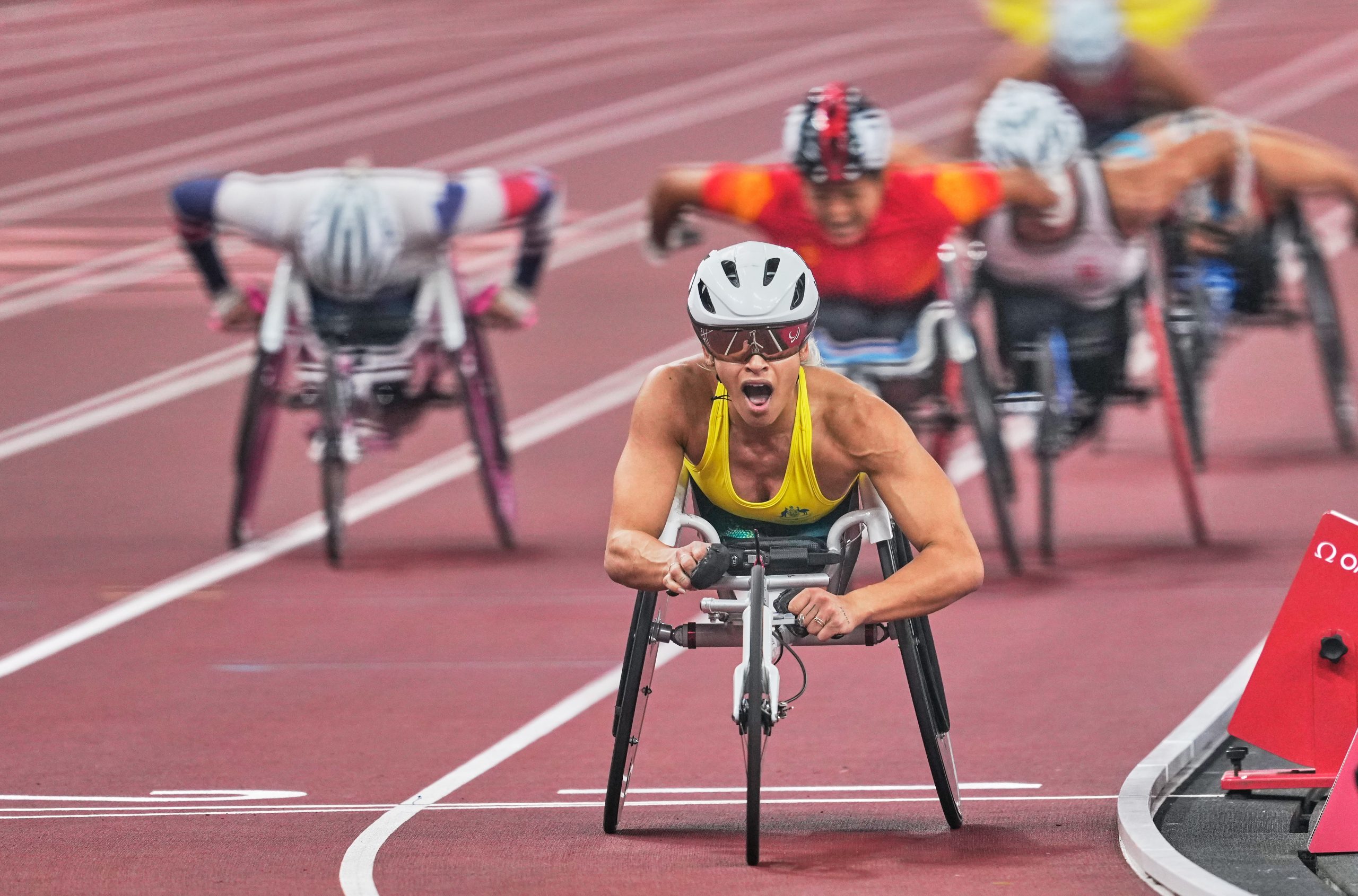 An epic swim from Paralympic Games debutante Jasmine Greenwood saw the 16-year-old rising star win a silver medal in the final of the women’s 100m butterfly – S10. One of the youngest members of the Aussie Paralympic swim team Greenwood came into the final as the second fastest qualifier. With no heats for the event, competitors were selected on times from prior swim meets to determine the top eight.

On this day, Madison de Rozario won her second medal in Tokyo, winning bronze in the women’s 1500m – T54 final, whilst the Gliders secured their first win in Tokyo to finish 9th.

Daniel Michel made Australian Paralympic history as he became the first individual boccia medallist and broke a drought of 25 years for a medal. Michel, competing in his second Games, agonisingly missed out on competing for gold but was not to be denied a medal. Michel got revenge on Great Britain’s Scott McCowan in the bronze medal match, after McCowan had beaten Michel’s teammate and fellow NSWIS athlete Spencer Cotie in the qualification pool matches.

On this day, the Australian women’s goalball team, the Aussie Belles, including NSWIS athletes Tyan Taylor and Brodie Smith, made history by becoming the first Australian team to compete in a quarter-final, after breaking a 25-year record in winning a match at a Paralympic Games.

Ellie Cole became Australia’s most decorated female Paralympian as she added another medal to her incredible haul after she claimed bronze in the women’s 4x100m medley – 34 points. Cole has now won 17 Paralympic medals! On her final night of competition, Cole led out the team that included Keira Stephens, Emily Beecroft and 15-year-old Isabella Vincent against a quality field including favourites, the USA and World and Paralympic record holders, Great Britain.

Timothy Hodge claimed third medal in Tokyo, winning silver in the men’s 200m medley – S9 final with a sterling performance. Describing it as the biggest moment of his career to date, Hodge pushed through the pain barrier in the final 50 metres to finish second in a time of 2:15:42. In a thrilling race which was won by Andrei Kalina from the Russian Paralympic Committee in 2:14:90, Hodge narrowly missed out on gold, with Ugo Didier of France taking the bronze medal in a time of 2:17:15.

The Australian men’s wheelchair basketball, the Rollers rounded out their Tokyo 2020 Paralympic Games campaign with a resounding victory over Turkey to secure a fifth place finish.

Madison de Rozario won her second gold medal of the Tokyo 2020 Paralympic Games, after a thrilling finish to the women’s T54 marathon. De Rozario claimed victory by 1 second over Swiss athlete Manuela Schaer, in a new Paralympic record. In winning gold de Rozario made history by becoming the first female Paralympian to win a Paralympic marathon.

To round out a successful Tokyo 2020 Paralympic Games, Australia’s most decorated female Paralympian Ellie Cole had the honour of being flagbearer for the closing ceremony. The 44 Team NSWIS athletes that were selected performed brilliantly, winning 21 medals including four gold.