The nine-time Paralympic gold medallist, who becomes the 41st Legend of Australian sport, has been a trailblazer throughout her career and was the first Paralympian to be inducted as a member of the Sport Australia Hall of Fame in 2007.

“It’s fantastic to be honoured in this way,” Sauvage said saying it was an important moment for Para-sport athletes.

“It should be that Para-sport athletes can be seen and considered in the same light and be recognised in the same manner, so to be elevated is just huge. It’s tremendous and to be thought of alongside some of Australia’s great athletes, it’s just amazing company to be alongside them.”

Louise Sauvage was a dominant force in women’s wheelchair racing for over 14 years, from her debut aged 16 at the 1990 IPC World Championships in Athletics to her retirement after the Athens Paralympic Games in 2004. Her first gold medal came in world record time and her record breaking continued from that moment.

She won nine gold and four silver medals at four Paralympic Games (1992, 1996, 2000 and 2004), twice won gold in 800m wheelchair demonstration races at the Olympic Games (1996 and 2000) along with a bronze at Athens in 2004 and Commonwealth Games silver in 2002. She collected 12 IPC World Athletics Championships gold medals and on five occasions from five appearances won the demonstration wheelchair event at the IAAF world championships.

Her performances elevated Paralympic sport into the spotlight of Australian sport for the first time.

“I think having the Games in Sydney was a big turning point for Paralympics in general and it’s gotten bigger and better and progressed from there. The momentum is being carried forward,” Sauvage says.

“In the past we got lost in the four years between Games, but it seems to have now maintained a presence and the more coverage you get the more people want to see it and get involved. It’s now just seen as another sport that people really enjoy seeing. It’s just been phenomenal that it’s come so far, and I’m really honoured and proud to have been part of that history.”

Such has been her influence that fellow wheelchair racer Kurt Fearnley and 2019 Hall of Fame inductee Matt Cowdrey have credited Sauvage for being the inspirations for their own glittering gold medal careers.

Cowdrey saying on his own induction it was watching Sauvage at the Sydney 2000 Olympic Games that led him to watch the Paralympics two week later with such interest, opening the possibilities for his own career.

Sauvage was selected to light the Paralympic cauldron at the Sydney 2000 Paralympic Games and to carry the flag for the Australian Team at the Athens 2004 Paralympic Games Opening Ceremony. She has a Sydney ferry, street and 6.3-kilometre wheelchair-accessible bicycle and walking path within Sydney Olympic Park, the Louise Sauvage Pathway, named in her honour, as well as numerous school sport houses around Australia. 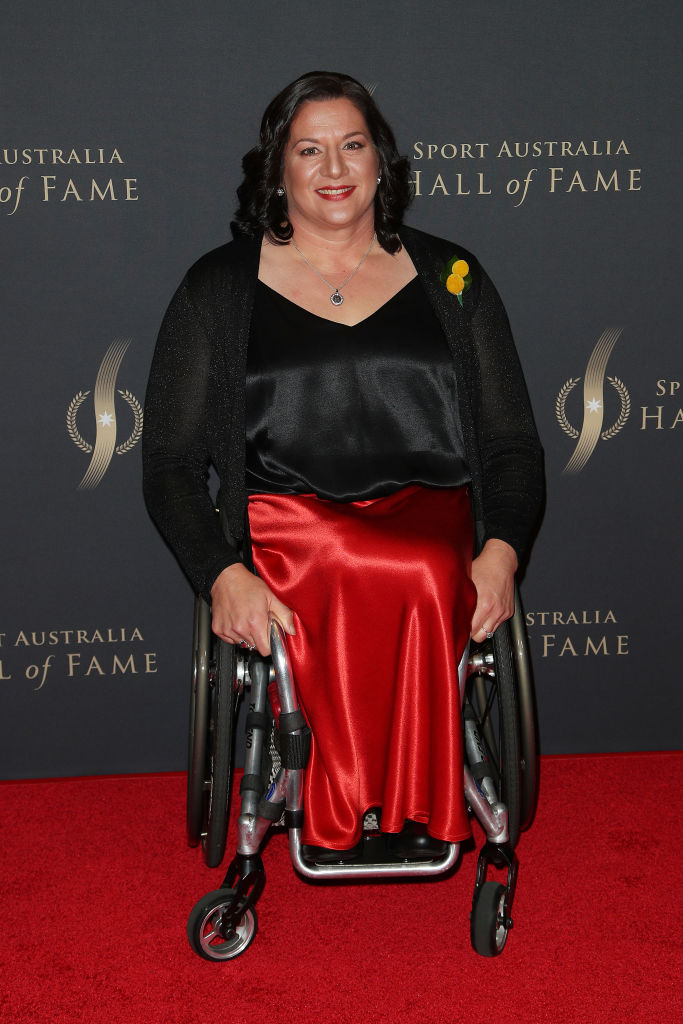 Whilst the majority of her success came over 800m and 1500m, she won medals at every distance from 100m to marathon. She won the Boston Marathon four times, Honolulu Marathon three times, Berlin Marathon twice and Los Angeles Marathon once. She set world records from 100 metres to 5000 metres, her last world record in 2004, just one month before her retirement.

“I had no idea that I could represent my country, I was just having fun,” Sauvage says of her early days.  “It was actually Frank Ponta. He was my first coach. He went to the first Paralympics in 1960 and he was the one that said, ‘you can do this’.  You have so much potential and you don’t even know what the limits are. I’m glad I had someone of that calibre really encouraging me and believing in me and guiding me through what I had no clue about.”

Sauvage says the entire Sydney Paralympic period remains the highlight of her career.

“The highlight was the way Australia and the world embraced the Paralympics.  It was a really big turning point and I was so proud to be Australian, that we did it and we made that change.”

“I had international athletes coming up to me saying we’re on the front page of the paper and on the news every night. It was just unheard of. And I was so excited that people were educated and they came to the Games.  The basketball games, the rugby games, they were packed, it was sold out, it was fantastic. It was just so unheard of at the time. It was fantastic that we’ve made that shift and it was great that Australia did that.”

Coach Education | How to develop a growth mindset in your athletes

Coaches play an important part in helping their athletes develop a growth mindset....

Tips for how to best stock your pantry

Planning and preparation is one of the most important steps in managing your diet....

The importance of warm ups

For a warm-up to be effective you need to put time into planning and ensure that the content is suitable for the individual or group....

The FIT Principle and how it applies to your training program

When it comes to elite sport, there are countless training concepts out there that profess to have the secret to success....

How the FODMAP approach could help your gut symptoms

Athletes who experience symptoms in their gut such as abdominal pain, cramping, diarrhoea, constipation or bloating know how frustrating it can be to live each day not knowing what their stomach is going to do....

Strength training is incredibly beneficial for adults (18+ years) to undertake for a number of reasons....

Coach Education | How to develop a growth mindset in your athletes

Coaches play an important part in helping their athletes develop a growth mindset.
Find out more

Tips for how to best stock your pantry

Planning and preparation is one of the most important steps in managing your diet.
Find out more

The importance of warm ups

For a warm-up to be effective you need to put time into planning and ensure that the content is suitable for the individual or group.
Find out more